Independence Day always makes me reflect on America’s amazing forefathers. When it comes to weather, Ben Franklin’s the famous flashy guy flying his kite in the storm. But the National Weather Service sometimes claims another revolutionary icon as the first weather watcher.

Thomas Jefferson kept a consistent record of his weather observations, in America, and in Europe. What he did then and what weather watchers do now is fairly similar. Measure precipitation and record highs and lows. Fancy equipment automates some of that now, but Jefferson had his own system.

“My method is to make two observations a day, the one as early as possible in the morning, the other from 3. to 4. aclock, because I have found 4. aclock the hottest and day light the coldest point of the 24. hours. I state them in an ivory pocket book in the following form, and copy them out once a week.

The 1st. column is the day of the month.
The 2d. the thermometer in the morning.
The 4th d° in the evening.
The 3d the weather in the morning.
The 5th d° in the afternoon.
The 6th is for miscellanies, such as the appearance of birds, leafing and flowering of trees, frosts remarkably late or early, Aurora borealis, &c.
In the 3d. and 5th. columns, a. is after: c, cloudy: f, fair: h, hail: r, rain: s, snow. Thus c a r h s means, cloudy after rain, hail and snow. Whenever it has rained, hailed or snowed between two observations I note it thus, f a r (i.e. fair after rain), c a s (cloudy after snow &c.) otherwise the falling weather would escape notation. I distinguish weather into fair or cloudy, according as the sky is more or less than half covered with clouds.”

THIS is one meticulous weather watcher! Thomas Jefferson wrote the book on how to do it, and still had time for some other pretty spectacular writing jobs. 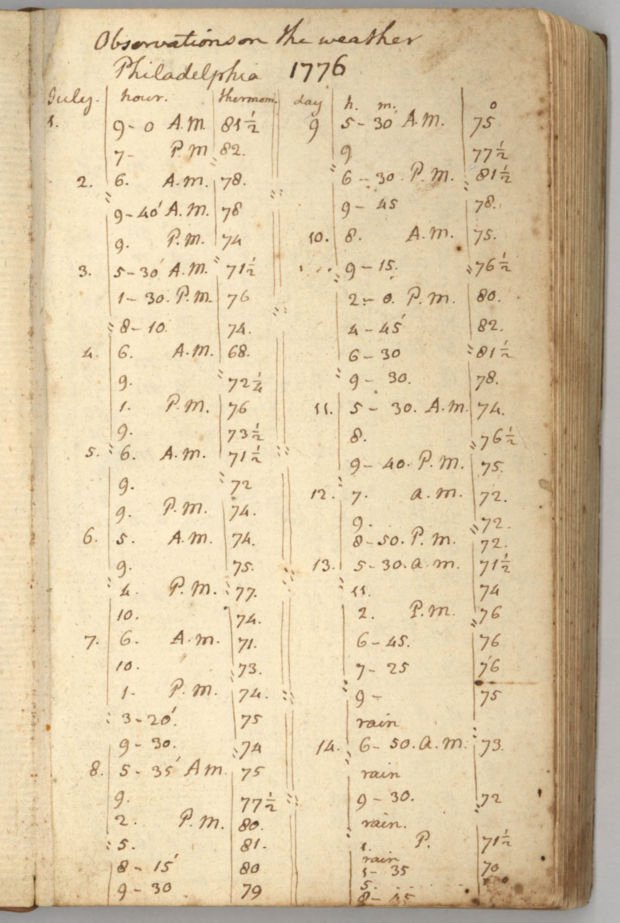 The attached photo is a reproduction of a page of his meteorological diary for Philadelphia in 1776. No animated graphics, just fascinating longhand entries. Do you see the “high” for July 4th? It was “76.” That’s the Spirit.