The Labor Day Flooding Of 2003 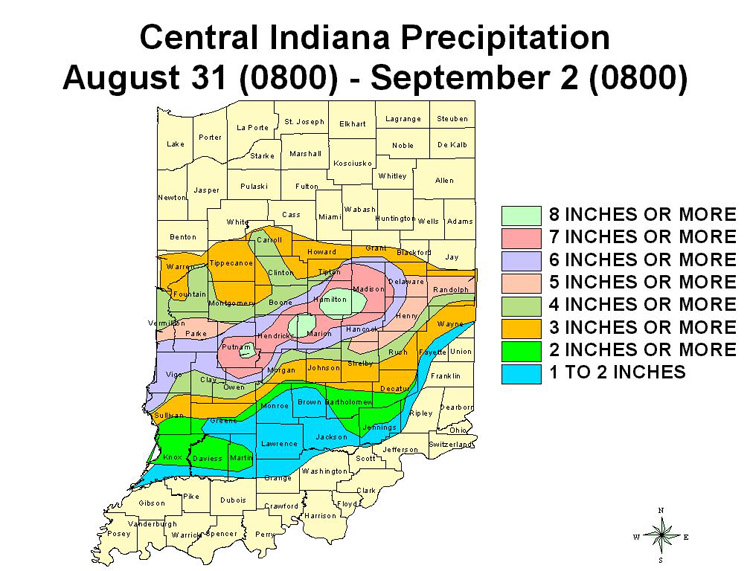 An area of low pressure moving along a frontal boundary across central Indiana, combined with plentiful moisture in part from the remnants of a tropical storm, brought heavy rain to central Indiana on September 1. The heavy rain fell on ground already saturated from recent rains. This combination created significant flooding across the area.

The heaviest rain was focused along Interstate 70 from Terre Haute into Indianapolis and along and near Interstate 69 from Indianapolis to Muncie. Widespread rain amounts of 6 to 8 inches during a 24 hour period were common across an eight county area. Indianapolis received the most rain ever for a calendar day (7.2 inches) breaking the old record set in 1895 (6.8 inches).

This heavy rain resulted in widespread flash flooding. There were numerous evacuations from homes and rescues from vehicles. Many schools were closed. Many neighborhoods that never saw flooding before were flooded. There were also hundreds of flooded basements. The National Guard was activated to help with road closings and rescues at the request of the city of Indianapolis.

As the flood waters moved into streams and rivers, more problems developed. According to a local newspaper account, nearly 3,000 residents across central Indiana applied for flood assistance and flood damage was estimated in excess of 20 million dollars. SEMA reports indicated more than 300 homes and nearly 60 businesses were flooded. Nearly 200 people were forced to evacuate their residences. The cities of Muncie and Anderson had near major flooding as the river crested at its highest level since April 1964 and June 1958 respectively. While the city proper of Muncie was protected by levees, considerable flood damage occurred in areas just outside of the city proper. Sandbagging in the city of Anderson saved more than 100 homes from flood damage. The local flood protection would have been overtopped without the sandbagging. There was extensive flooding across Hamilton County; however levels were nearly 2 feet below those of July 2003.

The White River in the southern portion of Marion County came up 15 feet in just 18 hours after the rain ended. The greatest flood since January 1, 1991 on the White River in Indianapolis met the record flood on White Lick Creek near Centerton and produced the largest flood seen in Morgan County since March 1913. This flood raced downstream and struck Owen County on the 3rd. Consequently, Owen County had its worst flooding since January 1991. As this flood approached Greene County, the flood transformed to an extensive agricultural flood and its speed slowed. A near major flood along the Eel River in the Bowling Green area met this large flood along the White River at Worthington. The resulting flooding in Greene County exceeded the July 2003 flood by 2.5 feet.